To play the musics modules, I recommend you to use XMPlay (for Windows). Even designed primarily for playing XM modules, it became a must at playing IT as well. 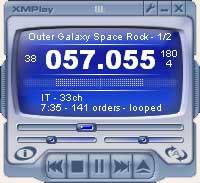 For the real thing, you'd get Impulse Tracker. Since it is a MS-DOS program, you would probably want to emulate it through DOSBox.

You can also get OpenMPT (the open source continuation of ModPlug Tracker) which support Impulse Tracker format and expanded its capabilities.

In other means, you can try some Impulse Tracker clones (which should run under linux) ChibiTracker and Schism Tracker.